Skip to Main Content
It looks like you're using Internet Explorer 11 or older. This website works best with modern browsers such as the latest versions of Chrome, Firefox, Safari, and Edge. If you continue with this browser, you may see unexpected results.

"Art is not life, nor a reproduction of life, but a representation carried out within the specific terms, conversions and limitations of the particular art used. Hence absolute truth, with reference to objective fact, is not to be found in the business. The most realistic art is considerablely removed from reality. Art does not give real things or imitations of real things. The thing that art gives is strained first through the artist's selections and judgments, and then through the specific techniques with he used to present them. If you are to enjoy an art, you must first accept its terms."
Thomas Hart Benton

"The secret to creativity is knowing how to hide your sources."
Albert Einstein

"There are no days in life so memorable as those which vibrated to some stroke of the imagination."
Ralph Waldo Emerson

"Genius is nothing but a great aptitude for patience."
George-Louis De Buffon

"Think of and look at your work as though it were done by your enemy. I you look at it to admire it, you are lost."
Samuel Butler

"A new idea is delicate. It can be killed by a sneer or a yawn; it can be stabbed to death by a joke or worried to death by a frown on the right person's brow."
Charles Brower 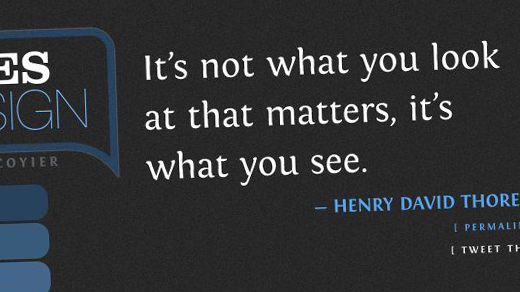 "If at first, the idea is not absurd, then there is no hope for it." - Albert Einstein

"I think if you're starting out early in the process by talking about your ideas for solutions, you're already not listening. I think you need to enter into any design project with that zen learner's mind of 'I don't know what I don't know'." - Kim Goodwin

"No masterpiece was ever created by a lazy artist." - Salvador Dali

"Form follows function - that has been misunderstood. Form and function should be one, joined in a spiritual union." - Frank Lloyd Wright

"Creativity often consists merely turning up what is already there. Did you know that right and left shoes were thought up only a little more than a century ago?" Bernice Fitz-Gibbon

"Any activity becomes creative when the doer cares about doing it right or better." John Updike

"Without aesthetic, design is either the humdrum repetition of familiar clichés or a wild scramble for novelty. Without the aesthetic, the computer is but a mindless speed machine, producing effects without substance. Form without relevant content, or content without meaningful form." Paul Rand

"Curiosity about life in all of its aspects, I think, is still the secret of great creative people." Leo Burnett

"A common mistake that people make when trying to design something completely foolproof is to underestimate the ingenuity of complete fools." Douglas Adams

"Creativity is allowing oneself to make mistakes. Art is knowing which ones to keep." The Dilbert Principle

"You got to be very careful if you don't know where you're going, because you might not get there." Yogi Berra

"You can tell the ideals of a nation by its advertising." Norman Douglas

"I am still learning." Michelangelo